"Honey, I'm Going to Whole Paycheck, Has Our Home Equity Loan Come Through Yet?"

“[Wild Oats] is the only existing company that has the brand and number of stores to be a meaningful springboard for another player to get into this space. Eliminating them means eliminating this threat forever, or almost forever.”
– John P. Mackey, co-founder and chief executive of Whole Foods, in 2007 email to Whole Foods Board Member. Mr. Mackey also posted on Internet message boards under the pseudonym Rahodeb for seven years, ending in 2006

Every man is his own greatest enemy, and as it were his own executioner.
– Sir Thomas Browne, Religio Medici

My wife loves Whole Paycheck. Even though the nearest Paycheck is a 20 minute drive from our home outside of Boston, and the really good (huge) Paycheck is 30 minutes away, she is reluctant to buy fruit or meat anywhere else. Shaws, which is right around the corner? forget it. Roche Bros., the next nearest supermarket? Boxed cereal, if they’re lucky. In fact, half the time my wife calls Paycheck “Bread & Circus,” the name of the original chain which Paycheck acquired in 1992. My soon-to-be 90 year old mother, who lives quite near a Paycheck that began as a Bread & Circus, won’t call it anything else.

When I go to Whole Paycheck, I assume that the minimum charge will be $100. For some reason, it’s almost impossible to get out of Paycheck for less than that. It’s like some obscure law of nature, or a function of consumer brain-washing, or both. At Shaws or Roche Bros., it’s actually an effort to break thirty bucks. But Paycheck, ahhh … The food is so exotic. It’s so beautifully displayed. That $40/pound goat cheese they are taste-sampling is so delicious, and after all, you only live once. For foodies, shopping at Paycheck is almost a religious experience. And by the way, I ain’t no foodie.

The only competition to Paycheck in the greater Boston area that I can think of is Trader Joe’s (which has around 300 stores nationwide), but frankly Paycheck is in a completely different class than Joe’s. In fact, the more I think about it, the more I’m inclined to say that Joe’s competes with Paycheck only when it comes to “dry grocery items” (chips and snacks) and frozen foods, and not in the key areas of meat, fish, bakery goods, fruits and vegetables. 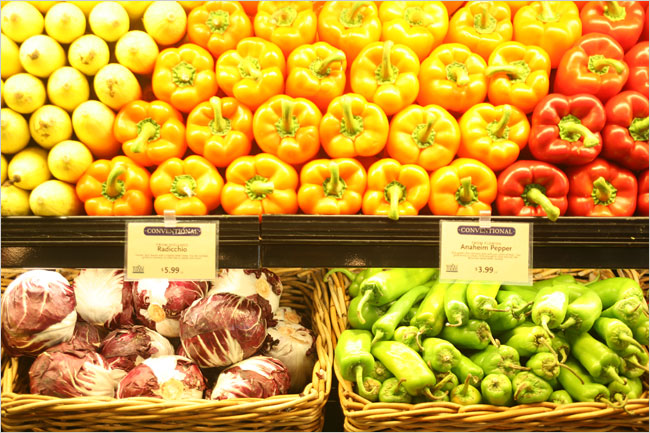 Wild Oats Market? Never shopped there, and never heard of it before its merger with Paycheck last year. According to this site, which maps all Wild Oats locations, the closest Wild Oats stores are in Saugus and Medford, way outside of my family’s travel zone.

Paycheck has a voracious appetite. Since its single-store start in Austin, Texas in 1980, it has swallowed up 15 other natural foods grocery chains, and by early 2007 it operated almost 200 stores nation-wide. Wild Oats operated over 100 stores, and was the U.S.’s second largest “natural foods” chain. In February 2007 Paycheck announced that it would acquire Wild Oats for $65 million, resulting in a natural food store behemoth 300 stores strong. (If you think I’m being facetious, you’re right).

The proposed merger triggered a Hart-Scott-Rodino filing, which gives the Federal Trade Commission the authority to investigate certain mergers and challenge them under Section 7 of the Clayton Act, which prohibits mergers or acquisitions where the effect “may be substantially to lessen competition, or to tend to create a monopoly.”

The FTC did challenge this merger. It’s position, summarized by the D.C. Court of Appeals, was –

. . . Whole Foods and Wild Oats are the two largest operators of . . . premium, natural, and organic supermarkets (“PNOS”). Such stores “focus on high quality perishables, specialty and natural organic produce, prepared foods, meat, fish and bakery goods; generally have high levels of customer services; generally target affluent and well educated customers [and] . . . are mission driven with an emphasis on social and environmental responsibility.” . . . In eighteen cities . . . the merger would create monopolies because Whole Foods and Wild Oats are the only PNOS.

The FTC attempted to block the acquisition pending its proceedings, but the U.S. District Court denied the FTC’s request for a preliminary injunction barring the merger. The D.C. Circuit denied an emergency motion requesting the injunction, pending appeal. With no legal obstacles, the merger was consummated in August 2007.

On July 29, 2008 the U.S. Court of Appeals for the D.C. Circuit issued a 40 page 2-1 decision (including the concurrance) reversing and remanding the case to the District Court.

The critical question on appeal was whether the economic impact of the acquisition should be measured against Paycheck’s core customers, and whether the District Court judge erred by failing to recognize this group as a relevant sub-market worthy of antitrust protection. I prefer to call the Paycheck core customers latte-drinking, Volvo-driving, NPR-listening, Birkenstock-wearing, New York Times-reading, natural/organic food-eating liberals, or “tofu-niks” for short. The District Court judge over-focused on Paycheck’s marginal customers. I prefer to call these customers McDonald’s-eating, Dunkin Donuts Coffee-drinkin, beef-loving, conservatives, or “beef-niks” for short. The tofu-niks shop at Paycheck religiously, and consider Paycheck to be only a step removed from their church or temple; the beef-niks go there to grab a gallon of milk or some apples only when a trip to Star Market is inconvenient. They mumble their response when the cashier gives them the standard Paycheck full eye-contact friendly greeting.

When it comes to mergers, as in many areas of antitrust law, how you define the market is everything. If Paycheck’s product market was grocery stores that catered mostly to beef-niks, in other words it was basically a conventional supermarket, it didn’t have a large market share and it’s acquisition of Wild Oats was not likely to negatively impact competition. However, if Paycheck and Wild Oats comprised a distinct market that catered to a sub-market of tofu-niks, competition in that “core” market might be threatened by the acquisition, at least in the 18 cities identified by the FTC, and the FTC may have the right to bar the acquisition.

The district court defined the product market broadly to include both groups, and therefore allowed the merger to proceed. The D.C. Circuit disagreed, and held that there is a core group of customers (the tofu-niks), and when this group is considered the market can be defined narrowly. Therefore, the merger was properly challenged by the FTC, and should have been preliminarily enjoined to allow the FTC to conduct a full administrative hearing. To reach this decision the D.C. Circuit’s opinion is filled with the opinions of competing economists, and enough economic jargon to set the average Paycheck customer’s head spinning – “small but significant non-transitory increases in price” or SSNIP, “critical loss analysis” and so forth. And, of course, any opinion by an economist is subject to scathing criticism by another economist, so the decision and dissent are filling with polite academic cross-invectives.

Where does the case go from here, given that the merger was completed almost a year ago? The cage-free hen-hatched, antibiotic-free, hormone-free, omega-3 enriched organic eggs have, so to speak, have been scrambled. (sorry …)

The FTC could, after further administrative proceedings, attempt to force Paycheck to divest itself of the stores where competition was the most affected (some or all of the 18 markets it had identified when it chose to challenge the acquisition) and re-establish competition in those areas. According to the decision, there were a limited number of markets where competition was most affected. However, one wonders how that would be implemented given that the operations of the two companies have been combined, and it may not be possible for Wild Oats to reestablish itself. I suspect that lawyers at both the FTC and at Paychecks’ law firms are scratching their heads in puzzlement. And after all, the FTC doesn’t want to actually hurt former Wild Oats tofu-niks who have converted to Paycheck, does it?

Oh yes, as mentioned, one of the three appellate court judges dissented, arguing that there really isn’t a core market for Paycheck’s customers, and that for purposes of merger analysis the market definition should be all supermarkets, not just “organic” supermarkets. He argued that the economic evidence supported the conclusion that “organic” and “conventional” supermarkets compete for the same customers, and therefore the district court judge’s decision should be affirmed.